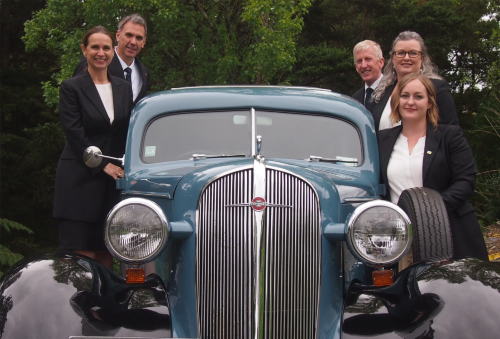 
Jason Morrison began his career as a funeral director in 1986 working in an Auckland funeral home. Jason had always wanted to be a funeral director, and his gentle and empathetic nature combined with a fastidious attention to detail made him perfect for the role.

After spending five years with the Auckland funeral home, Jason decided the time had come to open his own. The decision to open in Warkworth was an easy one. Firstly, he was raised here... and being geographically distant from the funeral home which had given him his start in the trade, didn't cross any ethical lines, or compromise his personal principles. So he found premises and, with the help of his dad, set about renovating it to include a small chapel and office, and in 1991 Jason Morrison Funeral Services was opened.

Over the years Jason has extended the premises a number of times, enlarging the chapel, and incorporating viewing rooms and two comfortable arrangement rooms.
Initially Jason was the sole operator in the business, but before long, word spread, and he could no longer cope alone. So began the search for just the right kind of people to work alongside him.

Over the years there have been a few changes, but finally we have the perfect team.... of honest, empathetic, professional, genuine and caring people.

Firstly our lovely Eddie, who has a wealth of life experience, a gorgeous sense of humour and a deeply empathetic nature. Eddie has his full New Zealand qualifications in embalming and funeral directing.

Nicola (Jason's wife) joined the team as a funeral director and qualified funeral celebrant. Nicola has studied grief in all it's forms, and so enjoys spending time talking to families who are struggling through their time of loss. She also brings many insights into her services, and combines these with excellent story telling skills in her eulogies (life stories)

Rosie is also a fully qualified funeral director and embalmer. Plus, she has a professional background in photo shop, and up to date, professional computer skills. She has a calm and approachable manner, and a delightfully fresh approach to the industry.

Debbie is our office manager, funeral assistant and monumental advisor. With over 30 years of experience in the monumental sector, she is perfect for this role. She also has a delightful, calm, genuinely caring personality, so manages our office and us, with absolute grace.

The latest recruit to our team is Callum, who again brings his qualifications and life experience to our small family. He, like all our current team members, has a bone deep honesty, and a true passion for the emotional welfare of the families we take care of.

Although every member of this team is unique, with their own specific skills, together we form a group of people who are passionate about the families we serve.
Which means, when the worst happens and you have to face the loss of someone you love.... you and your family will be taken care of by people who're genuinely dedicated to ensuring that time is as stress free and easy as it's possible to be.

Oh.... and that gorgeous old car we're all so proudly standing next to? That's Oliver. He was born in 1936, was originally built as a hearse and after going through some tough times, was lovingly rebuilt by Howard Porteous until finally coming to live with us here in Warkworth. He is extremely handsome, very distinguished and is the perfect last ride for anyone who appreciates true craftsmanship.